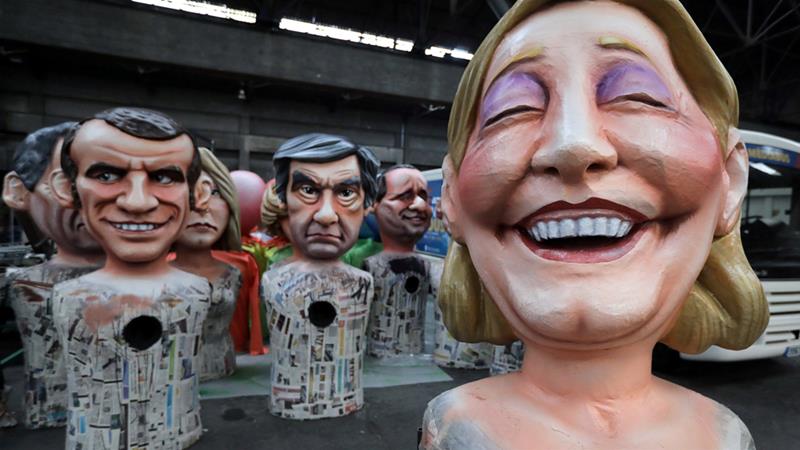 Scattered across the globe, thousands of miles away from the mainland, France’s overseas departments are often sidelined by the country’s politicians – except during the run-up to presidential elections.

In November, Marine Le Pen, leader of the far-right National Front, visited Reunion and Mayotte in the Indian Ocean, then French Guiana in the Caribbean in December. The same month the independent far-left candidate Jean-Luc Melenchon and socialist break-away Emmanuel Macron both touched down in the Antillean islands of Guadeloupe and Martinique.

Despite representing only 4 percent of the electorate, a tour of the overseas departments and territories has become obligatory for French presidential hopefuls.

This year, following riots in Mayotte last summer and a government bill to bring “real equality” to the overseas regions, these often forgotten parts of France have risen even higher up the agenda – especially for Le Pen.

“L’Outre-mer [the overseas], at the heart of the project for France,” is the title of the National Front’s overseas programme, which Le Pen unveiled during her Reunion visit. Historically, the National Front has performed badly among the overseas departments, in 2007 receiving an average of 5 percent of the vote, compared with 17.9 percent nationally. Yet, in 2012, while Le Pen’s share of the vote remained around 5 percent in Guadeloupe, Martinique, French Guiana and Mayotte, in Reunion it shot up to 10 percent.

Since then, the anti-immigrant Eurosceptic, who is facing both legal and financial woes at home, has seen another unexpected surge in popularity in this far-flung island. In 2012, Le Pen’s visit to Reunion prompted demonstrations. In November, however, her trip passed with scarcely a heckle.

According to a survey conducted last year 25 percent of Reunion’s electorate plan on voting Le Pen in the presidential election, to be held in two rounds in April and May.

Jean-Claude Otto-Bruc, leader of the Reunion branch of the National Front, believes it will be closer to 50 percent. His may be an optimistic estimate, but, nonetheless, Le Pen’s growing popularity in Reunion should trouble mainstream politicians. Cries for change are mounting in the island and elsewhere across France’s overseas departments.

In 1946, under the “departmentalisation law” former slave colonies, Guadeloupe, French Guiana and Martinique in the Caribbean, and Reunion in the Indian Ocean were given the same political status as mainland departments. The law’s advocates, most prominent among them the Martiniquais writer and politician Aime Cesaire, hoped departmentalisation would put an end to “master-slave relationships.”

In the 70 years since, however, the French government has failed to lessen the social and economic inequalities between the overseas departments and the mainland.

In Mayotte, which graduated from an overseas territory to a fully-fledged department in 2011, riots against the French state lasted for more than a month last summer. Since its change of status, joblessness, now at more than a third, has failed to fall, and 84 percentof the department’s 220,000 people still live below the poverty line, compared with 16 percent in mainland France. Taxes and living costs have also increased: prices are 7 percent higher than in the mainland.

The situation differs little in the four original departments.

In 2009 demonstrations against the French state started in Guadeloupe and spread toFrench Guiana and Martinique before reaching Reunion and Mayotte in 2011.

Demonstrations and even riots have erupted since then. In 2012 and 2013 young Reunionnais clashed with police as they protested against the high living costs and lack of job opportunities. Unemployment has risen in recent years, with the average across Martinique, Guadeloupe, Reunion and French Guiana now above 20 percent, double the mainland average. Almost 30 percent of Reunionnais are unemployed. Prices are between 7 percent and 12 percent higher than mainland France.

In 2014, the most recent year for which figures are available, all the islands, except Martinique, saw exports fall and imports, already high, rise further. Exports represent only 7 percent of Reunion’s trade and imports 93 percent, amounting to more than 4.5 billion euros ($4.85bn).

The problems in France’s departments go all the way back to their change of status 70 years ago. Departmentalisation brought few successful efforts to diversify the mono-economies of the plantation colonies.

It also failed to turn the social order on its head. The minority ruling elite – white descendants of slave-masters and plantation owners, known as Bekes in Guadeloupe and Martinique and Gros Blancs in Reunion – gave up political control in 1946 but maintained their grip on the economy. During the 2009 protests anger was directed at the French state but also at the Bekes and their abuse of economic power. In Martinique’s capital, Fort-de-France, 2,000 people, nearly all of whom were black, marched, chanting slogans such as: “Martinique is ours, not theirs!”

The government’s bill for “real equality”, put forward in August 2016 in response to the riots in Mayotte, proposes to reduce both the disparities between mainland and overseas France and the internal inequalities within the departments themselves. It includes plans to bring state welfare in the departments in line with mainland France. This would mean, for example, an increase to the pensions of stay-at-home parents.

Deputies in the French National Assembly passed the bill in October, increasing the text from only 15 articles to 116. Yet, earlier this month, despite passing the bill, senators stripped back some of its most far-reaching proposals. For example, the “Small Business Act”, which would reserve a third of public markets for local small and medium-sized businesses, was removed.

The revised bill still has to be put to the the Joint Committee in February and then back to the National Assembly in March. Even if the deputies there manage to reinstate some of the more important articles for many overseas voters the bill is too little, too late.

“People want change, and they want it now,” says Otto-Bruc. This, he argues, explains Marine Le Pen’s increasing popularity among the Reunionais.

“Unlike other politicians, who have simply made promises they have no intention of keeping,” he adds, “Marine is a woman of honour.”

Le Pen’s overseas programme lays out plans for the creation of a new ministerial post for Overseas France and the Sea, an extension of the current Minister’s remit.

“Energy, transport, security, the sea offers it all,” says Otto-Bruc. “The sea is how we will develop the overseas departments and bring them out of the current crisis.”

Le Pen plans to attract investment to develop maritime industries by reducing taxation and the creation of “French overseas zones of priority investment”.

She also pledges to get rid of additional pay for civil servants who work in the overseas regions, and to give overseas citizens preference for local jobs.

Fabien Guerrero, a teacher from mainland France who has been working in Reunion for 10 years, would lose his 30 percent additional pay under such plans.

“I’m not worried for myself, though,” he says, “I’m worried for Reunion. If Le Pen wins she might withdraw France from the European Union and that would be a disaster for people here.”

Guerrero believes that the National Front is capitalising on Reunion’s employment crisis.

“For years left and right-wing governments have failed to provide the right training for Reunion’s young people, leaving them with no job opportunities and reliant on state handouts,” he explains. “It has been a way of controlling the population. Now Le Pen is promising to give them jobs and give them back control – it is a very clever strategy.”

Other popular measures proposed in Le Pen’s Outre-mer programme include a promise to reduce living costs through large reforms to the tax on Outre-mer products – the current tax system, Le Pen argues, causes inflation and, therefore, higher prices – and a commitment to make the education system, burdened, according to Le Pen, by immigrants, “a national priority.”

Immigration is central to Le Pen’s overseas programme. She wants to stem the tide of immigrants arriving in the departments and to revoke the the law by which anyone born on French soil has the right to French citizenship.

For Sylvie, a Reunionnais teacher, this is why the National Front has appeal in the island more so than the other overseas departments: Le Pen says what people want to hear, but also “what they themselves do not dare say about immigrants.”

Many Reunnionais don’t like what they don’t know. They can be quite traditional, quite conservative,” says Sylvie.

Among overseas citizens, the former prime minister caused consternation last year with his comments about colonisation.

“No, France is not guilty for wanting to share its culture with the people of Africa, Asia and North America,” Fillon said during a speech in August. He has since, when asked about his plans for France Outre-mer, replied: “We are all French. We are an indivisible republic.”

More socially and fiscally conservative than most of his Republican rivals, he plans to implement a nationwide programme of austerity to reign in France’s deficit.

Macron, leader of the breakaway En Marche movement, also seems reluctant to increase the budget for France’s overseas regions, saying there is no “magic solution” for their problems. During his visit to Martinique and Guadeloupe, though, the former socialist finance minister emphasised the need to invest in tourism sectors to create low-skilled jobs and pledged that laws governing France’s overseas regions would recognise their diversity.

“A rule of law made in Paris cannot be applied to everyone and everywhere in the same way,” the centrist candidate said.

Among Macron’s former party, Manuel Valls, who served as prime minister in Francois Hollande’s government before his bid for president, has been a strong proponent of the bill for “real equality”. He was, however, unexpectedly beaten by Benoit Hamon in the socialist party’s primaries on January 29.

Further to the left than Valls, Hamon plans to introduce a universal basic income across France, including the overseas departments. So far, his proposals specific to overseas France are limited, but include developing the digital economy, increasing overseas police forces and reducing class sizes in schools.

“We’ve heard it all before, though,” says Sylvie, who voted Socialist in 2012. Like a lot of Reunionnais, she is disappointed with mainstream politicians and their “false promises”, which “never materialise” once the campaign is over.

While disillusionment has pushed many Reunnionais towards Le Pen and her far-right policies, Sylvie believes the majority will never vote for the National Front “because of our roots as slaves, because of colonialism, because of the colour of our skin”.

For many of France’s overseas citizens, however, this colonial heritage – still alive and well 70 years on from decolonisation – is itself a driving force to seek change, by whatever means necessary.

“I’m voting Le Pen,” says Amedeo Hatchi, a 90-year old farmer from Guadeloupe whose state pension of France 400 euros ($431) a month has not allowed him to give up work, “the worst for the worst.”

“Departmentalisation didn’t go far enough. We [overseas citizens] need a revolution,” says his neighbour and trade-union activist, Madlys Lefort, “some of us will even consider voting Le Pen to get it.”

This article was originally published on Al Jazeera English on 5th February 2017. The original article can be read here.